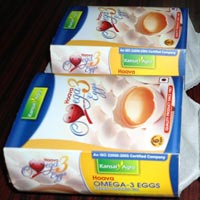 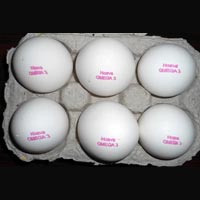 Keeping in view the work carried out by different Scientists HOAVA Omega-3 Egg has been developed by changing the diet of hens for Dr. Kansals Herbal Odourless eggs.

HOAVA :
H in HOAVA eggs stands for Herbal, O for Odorless & Organic; A for free from Antibiotic Residues; V for rich in Vitamins and A for free from Aflatoxin Residues. HOAVA eggs are also rich in Omega-3 fatty acids (400mg), DHA (100mg), CLA (400mg) Lutein (125mg) and Vitamin E (15.78mg), which are beneficial for human health. The Omega-3 Eggs are enriched with Omega-3, DHA, CLA, Lutein, Yolk Pigment and very much rich in different vitamins, keeping in view the health of human beings. This Omega-3 Egg is also worlds first egg in which all the parameters have been combined together for best health programme.

HOAVA Omega-3 Eggs are also free from pesticide residues as well as free from Salmonella, E coli and other bacteria. Being odorless, egg drink can be prepared from these Omega-3 Eggs. The layers are given vegetarian feed along with a mixture of 16 herbs. There are herbal residues in the Omega-3 Egg which are having some antibacterial properties. These Omega-3 Eggs can be kept at room temperature for more than 8 weeks without any bacterial growth.

When there is deficiency of Omega-3 fatty acids & DHA, the following symptoms are observed :

Lutein is a carotenoid and its main role is in eye health, specifically in reducing the risk of Age related Macular Degeneration (AMD), which occurs when the fragile center of the retina (the macula) deteriorates from a lifetime of slow but steady damage. The macula is a small area of the retina responsible for central vision, and high visual acuity. Poor macular health can cause oxidative stress within the retina, leading to a loss of central vision. Secondly it plays a role for maintaining healthy skin. Thirdly it helps in improving cardiovascular health by reducing arterial wall thickening, a component of arthrosclerosis.

Benefits of Vitamin E for Health :

Enrichment With Vitamins :
Omega-3 Egg is not only enriched with vitamin-E, but is also very much enriched with other fats soluble vitamin-A (for eye sight and other exo (skin) and internal lining (endo thelial linings) of digestive, respiratory, urinary and reproductive system, vitamin D3 (for calcium phosphors metabolism, development of skeletal system, embryonic development, abnormalities of joints and bone growths) and water soluble vitamins like B12, Biotin, Folic acid, Thiamine, Riboflavin, Pyridoxine. These vitamins can be same in the table given below. Water soluble vitamins help for the blood formation, beri beri disease, migraine, liver functions, anti-carcinogenic, factors, carbohydrate and protein metabolism and reproductive problems (in ladies).

The biological value of egg vitamins is much higher, than the vitamins consumed in the form of capsules prescribed by medical practitioners.